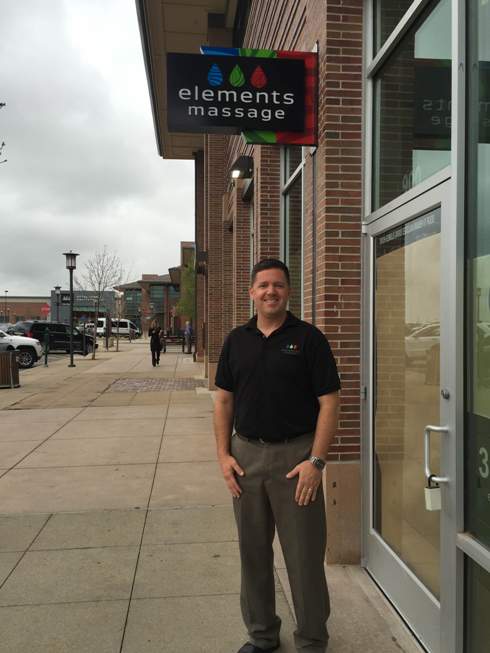 Retired Maj. Freedom Carlson has a new ground game. The former Harrier pilot is still flying, but he is also a new business owner, providing stress relief and healing at his massage studio in Westminster, Colo. Carlson has advice for vets who want to get into business and has a message for Americans this Memorial Day Weekend.

Highlands Ranch, Colo., May 27, 2016 (Newswire.com) – Some people are born with a mission. When you are given the name Freedom, it is not too difficult to imagine that a child might grow up to serve his country. Maj. Freedom Carlson served 18 years in the U.S. Marine Corps. An AV-8B Harrier pilot and flight instructor, Carlson flew missions from amphibious aircraft carriers with Marine Expeditionary Units (MEU). He had three tours of duty in Iraq, Afghanistan and the Arabian Gulf, and helped to enforce a no-fly zone over Libya in 2011.

“I think my most poignant moment was when I first landed an airplane on an aircraft carrier,” says Carlson. “It was such a feeling of awe and accomplishment, but I think my greatest achievement was teaching students to fly and to instill in each individual the sense of importance and seriousness that aviation requires.”

These days, Freedom Carlson still flies, now for Southwest Airlines, and he’s added a new assignment to his long list of achievements – entrepreneur. In May, Carlson became the owner of an Elements Massage™ studio in Westminster, Colo., and is using the lessons he learned in the military to bring leadership, discipline and vision to his new studio.

“In the massage industry, as personal as it is, the vision has to be all about our clients and their well-being. It is important to have a vision, and if that vision is rooted in truth and honesty, it will show to the customer. The most fulfilling moment for me is watching clients leave the studio with unbelievable looks of relaxation and calm on their faces. I never anticipated the feeling of purpose I would have once I saw how people reacted to our services.”

Like many vets coming out of service, Carlson used his military training and skills to land a job with an airline. While he could have pursued many different paths, business ownership appealed to him more than other options.

“I wanted a separate means of providing for my family, yet wanted to be part of the community in a way other than simply living in the community.” Freedom Carlson, Owner of Elements Massage in Westminster, Colo.

“I wanted a separate means of providing for my family, yet wanted to be part of the community in a way other than simply living in the community.”

Carlson worked with a franchise consultant to determine which business model fit his goals.

“I didn’t know that a massage studio would be my franchise, but when I spoke with the consultant, we investigated what was right for my lifestyle, my business model, and what would make me happy. I think she knocked it out of the park with her recommendation.”

There are many organizations available to help vets, and in Carlson’s case, he was supported with help from the Small Business Administration and his franchisor, Elements Therapeutic Massage, LLC, which offered a veteran’s discount on his franchise fee.

“I received tremendous support from the leadership. Marketing and Development worked with me weekly for more than four months straight to keep me on task. The site manager helped me find the best possible location and coordinated finding a good contractor. I can also say Elements treats everyone, not just veterans, well. They take pride in their franchisees and seem to understand their vested interest that each franchisee does well.”

“Memorial Day is a day to reflect on the lives of those who paid the ultimate price for our freedom in this country. It is a day to remember their sacrifices and to glean a renewed appreciation for the freedoms we’ve come to take for granted in the daily hustle of our own lives.

“It is a day to reflect on the meaning of America and if our beacon of hope across the world still shines. It is a day to reconsider our own personal example as we walk our streets, and it is a day to compare our values to those who did pay the ultimate price.

“It is a day to reflect on being an American.”