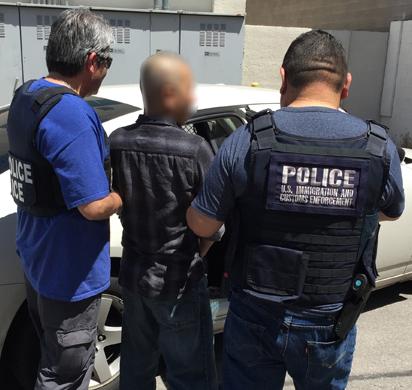 During the four-day enforcement action, ERO officers apprehended 70 aliens with criminal convictions. The remaining three fall under the agency’s enforcement priorities as recent immigration violators. Those arrested had criminal histories with past convictions for drug trafficking, DUI, weapons violations, child sex offenses, identity theft, child abuse and other serious criminal offenses. Fifteen of those taken into custody were criminal aliens who now face federal prosecution for re-entry after deportation, a felony punishable by up to 20 years in prison.

“ICE’s targeted immigration enforcement operations like this one take convicted criminals and other public-safety threats off the streets,” said Rebecca Adducci, field office director for ERO Detroit, which covers Michigan and Ohio. “These actions focus our resources on the most egregious offenders and promote public safety in the communities in which we live and work.”

Among those arrested were:

The foreign nationals arrested during the operation include citizens of 19 countries, including Mexico, Guatemala, El Salvador, Cuba, Dominican Republic, Lebanon, Poland, Bosnia, Vietnam, South Korea, Nicaragua, Nigeria, Jordan, New Zealand, Jamaica, Guyana, Belize, Sudan, and Lithuania. Those who are not being criminally prosecuted will be processed administratively for removal from the United States. The arrestees who have outstanding orders of deportation, or who returned to the United States illegally after being deported, are subject to immediate removal from the country. The remaining individuals are in ICE custody awaiting a hearing before an immigration judge, or pending travel arrangements for removal in the near future.

All of those apprehended during last week’s operation were immigration enforcement priorities as outlined in Department of Homeland Security (DHS) Secretary Jeh Johnson’s 2014 memorandum. Priority 1 targets include threats to national security, criminal street gang members, convicted felons, and aggravated felons. Priority 2 targets include individuals with convictions for three or more misdemeanors, or convictions for significant misdemeanors, including DUIs.