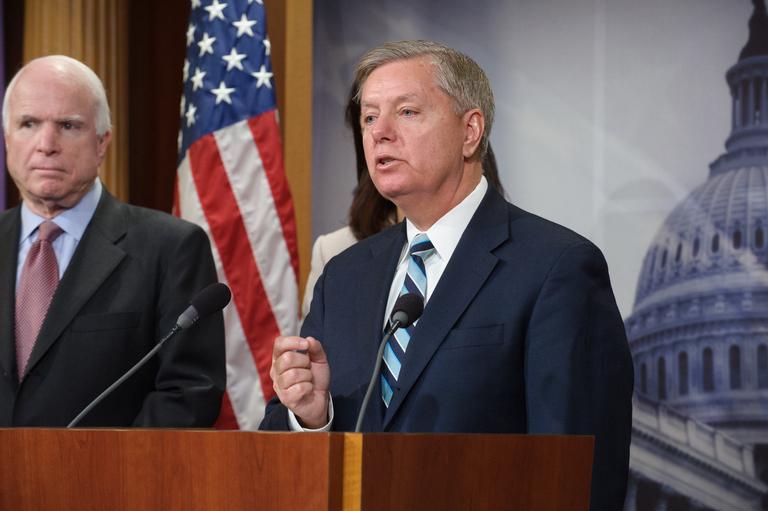 “A timely decision on U.S. force levels is necessary so that our allies and partners can generate forces and make appropriate pledges for the Resolute Support Mission beginning in January 2017,” wrote Graham, along with a bipartisan group of senators. “We urge you to announce any changes to our current planned force levels ahead of the relevant NATO conferences, giving the strongest consideration to the assessment of your military commanders and to conditions on the ground.”

The text of the letter is below and attached.

We appreciate your continued willingness to consider adjustments based on the security situation in Afghanistan to preserve and build upon the hard fought gains achieved over the past 14 years. In recent months, the Senate Armed Services Committee has heard from General Nicholson, General Campbell, and General Votel – the senior military commanders closest to the fight – that the security situation in Afghanistan is deteriorating, which challenges the ability of the Afghan government to provide stability and security for its people.

We understand that General John Nicholson is in the process of completing his assessment of the capabilities and associated troop levels he believes will be necessary in Afghanistan to confront a resurgent Taliban, a reviving Al Qaida, and a rising Islamic State in Iraq and the Levant, and will make recommendations in the near future. As the Commander on the ground, we believe that his recommendations should be given extraordinary weight. We also believe that the withdrawal of U.S. forces from Afghanistan should be based on conditions on the ground and that considerations on troop levels should be driven first by what capabilities are needed to protect our national security interests in Afghanistan, and second by the number of troops it takes to enable those capabilities.

Furthermore, the North Atlantic Treaty Organization (NATO) will hold its Force Generation Conference beginning on June 8th and the NATO Summit in Warsaw will begin on July 8th. It is important that our allies and partners understand any changes to our planned force levels for Afghanistan before those key events to determine and plan for the number of troops they will commit to operations in Afghanistan in 2017. As has long been the case, we believe our NATO Allies and partners will follow our lead in Afghanistan. In February, General Campbell testified to Congress that “If our number continues to go down, NATO will absolutely reduce their commitment to Afghanistan.” Additionally, we do not think we are going to learn anything in the next several months that we do not know now. Should you decide to revise the planned number of U.S. troops in Afghanistan for 2017, we urge you to announce such a decision before the relevant NATO conferences convene and inform our partners and allies of that decision so they can plan accordingly.

In summary, a timely decision on U.S. force levels is necessary so that our allies and partners can generate forces and make appropriate pledges for the Resolute Support Mission beginning in January 2017. We urge you to announce any changes to our current planned force levels ahead of the relevant NATO conferences, giving the strongest consideration to the assessment of your military commanders and to conditions on the ground.